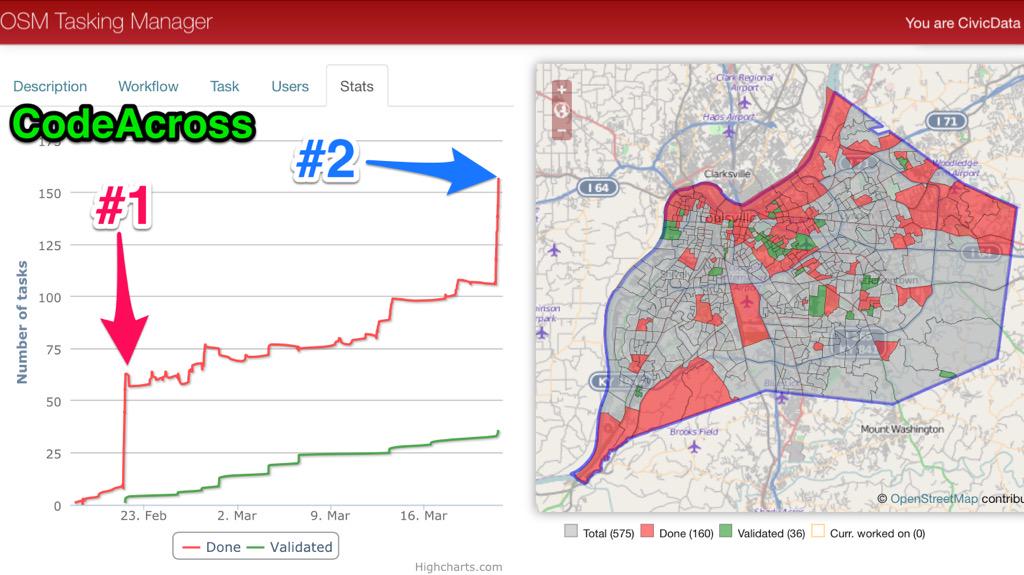 During CodeAcross, The Civic Data Alliance took newly open GIS data (precise locations of buildings and address information) from the city of Louisville and organized volunteers to load it into Open Street Map so the American Printing House can use it to improve Nearby Explorer. 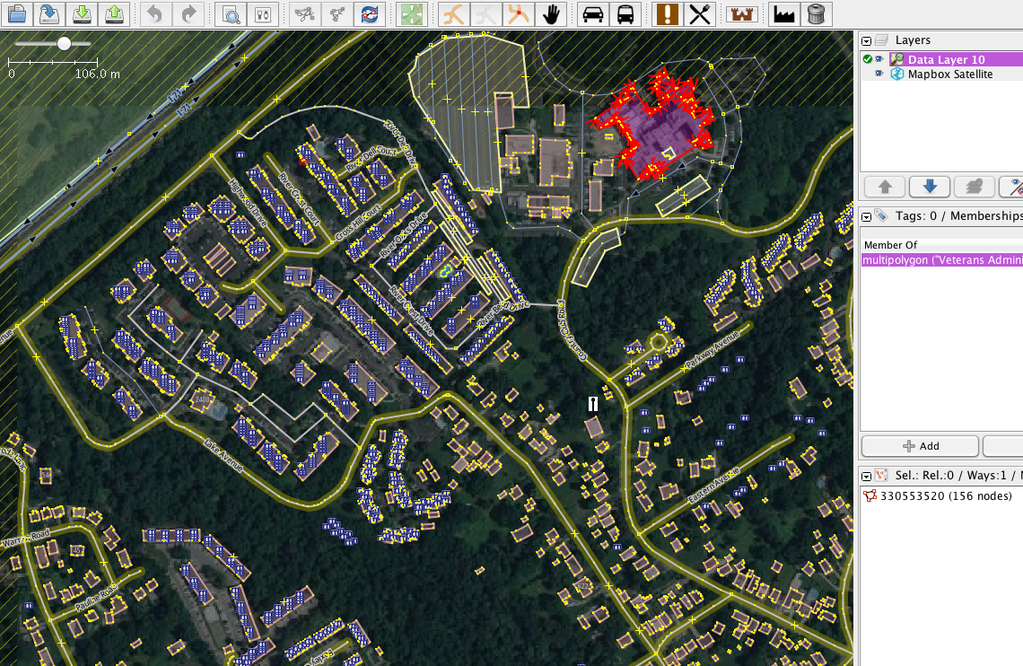 We taught volunteers how to use OSM’s Task Manager to load buildings and addresses, one neighborhood at a time, and made initial progress toward adding the data for the entire city into OpenStreetMap. There is still a lot of work to be done to get all the buildings and addresses loaded, so please join us for Part 2 of the effort Saturday, March 21st at the American Printing House for the Blind.

For this event there was actually zero programming needed. All that was needed is a laptop, following written and spoken instructions, and an attention to detail. Any other skills are just a bonus. It was a great way to build our brigade with some prep work by our leaders.

Between February 16 and May 15, 20+ people have collaboratively worked on over 550 areas of the city, for an estimated 410+ hours of work. We are now finished!

“This is simply amazing that it shows up so quickly. I am amazed to see the power of CDA and what a group of dedicated people can actually accomplish. It is amazing how much actually got done in one day. We can easily tell!” - Larry at APH

“I’m amazed! I was testing on a bus around the time the CDA added the data north of Brownsboro Rd, and when it showed up, I thought I was running the wrong build of our app. Should have checked my email before trying to confirm I was running the right build!” - Rob at APH

We also had some massive help from an expert OSM editor named Sam Wallingford, an engineering student at UVa. He started work in April and over the next month completed more areas than everyone else combined. Thanks so much Sam!

The CDA is looking at helping other brigades import their data, and may run a workshop this September. We are also prepping other city data to load, including parks and natural areas, streams, alleys, cemeteries, parking, and historic markers. We will continue to push the city to release more data to load, like traffic signs, traffic signals, 1-foot contours, parcels, and impervious surfaces.

CDA Work Before the Event

The core CDA put in about 140 volunteer hours to prep for the project and event. Here’s what we did. If your brigade were to do it, it would likely take 40 hours of prep with our guidance (please contact us for help!).

Over 40% of Louisville’s buildings/addresses are loaded into OSM thanks to you! Keep going: http://t.co/V746batQF4 pic.twitter.com/1IypkApRxN

Collaborating and learning how to put buildings and addresses into Open Street Map.

Resident Open Street Map expert Jeff McAdams (has the most edits in the city) discussing the details of our building import.

Listening to Larry Skutchan from the American Printing House talk about how the data can help his Nearby Explorer app users.

Now that Louisville has some OSM building data, you can view the city in 3D CAD software. https://t.co/v9DONbSm64 pic.twitter.com/d1sexRnyNK

This project is maintained by civicdata with image compression using guetzli